RICH WITH MILANESE HERITAGE AND SHIMMERING WITH EXQUISITE GEMS, POMELLATO PREVIEWS SOME OF ITS MOST PRECIOUS JEWELLERY MASTERPIECES. 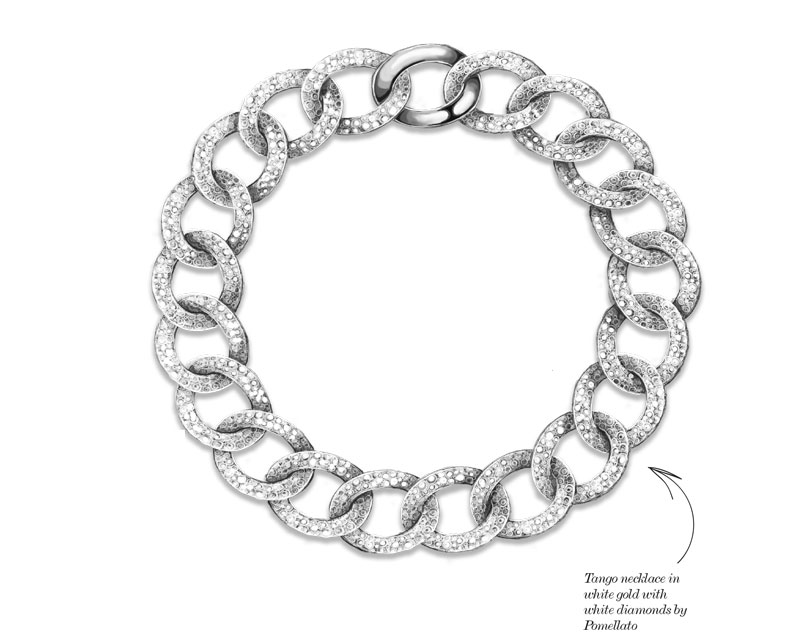 Masterful in its jewellery savoir-faire, Pomellato is proud to have presented some of its most exquisite pieces ever created exalting goldsmithing tradition and sophisticated craftsmanship, Pomellato represents Milanese design with over 48 pieces of brightly coloured gems, meticulous pavé diamonds, and audacious goldsmith genius.

Pomellato designed the concept of the prêt-à-porter jewel for the independent woman in the 1960s. More than fifty years later, this concept has evolved, as has its exquisite jewellery savoir-faire. This is evidenced especially in Pomellato’s new high-end masterpieces, such as the special Sabbia parure designed to be worn separately or in tandem: the shimmering ring, earrings and necklace in white gold with a pavé of emeralds all sourced sustainably from Gemfields, with white and brown diamonds. Flowing from green to white gemstones like a precious waterfall, the ring is carved into a modern rectangle design, then squared on the finger with audacious appeal. To pair and complement, circle earrings with similar colour gradation round up to 168 emeralds and 118 white and brown diamonds. Dangling from the neck in rectangle and circle from a bold white gold chain, a statement-piece necklace boasts 360 emeralds and 146 white and brown diamonds. 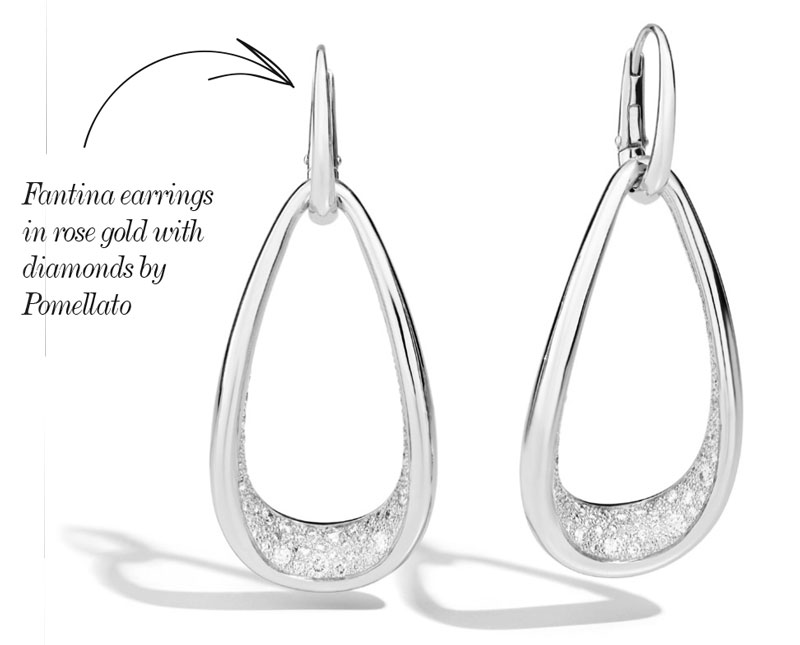 Sculpted for queens of resplendence, Pomellato also introduces its white gold Iconica choker, entirely covered with diamond pavé for a high-shine finishing touch. Smooth to the touch with gem-setting mastery, the shimmering choker incorporates 1,706 diamonds for a total of 25.8 ct. of true preciousness. A voluptuous 3.9 ct. Brazilian emerald cocktail ring in white gold with 328 white pavé diamonds embracing its bright green central stone, which twist design dances with sensuality. Never to be outdone, magnificent Tango clinks as a necklace with sculpted white gold links, as it combines over 2,920 pavé diamonds for a grand total of 65.3 ct. of sparkling perfection.

Iconic traits from signature Pomellato collections are evidenced throughout the precious display. Among them, the beloved, ever-iconic Nudo ring in both maxi and classic sizes, each shining brightly with hand-cut deep blue doublets such as London blue topaz, agate, turquoise gemstones and precious diamond pavé. The same Nudo parure is presented in pink quartz and pink chalcedony with brown diamonds. The Nudo sautoirs feature masterful double-sided Clessidra-cut gems, dangling asymmetrically from delicate, often adjustable chains in rose and white gold featuring sky blue topaz with chrysoprase or pink quartz with pink chalcedony and pavé diamonds to add a highshine splash to the necklace, worn doubly or singly around the neck. For a more daywear look, the same colored gems are set onto the Nudo lariat necklace in rose and white gold, with pavé diamonds and an ingenious hidden circular clasp that acts as a feature of the necklace.

The brand new Fantina collection includes a voluptuous diamond-edged ring in rose gold or white gold and 61 diamonds, to pair with a cuff bracelet of the same sensualcurves design (133 diamonds) and bold pendant earrings of 134 diamonds, topped off by a spectacular statement piece tear-drop pendant that features 59 diamonds or 150 diamonds set in the white gold version. 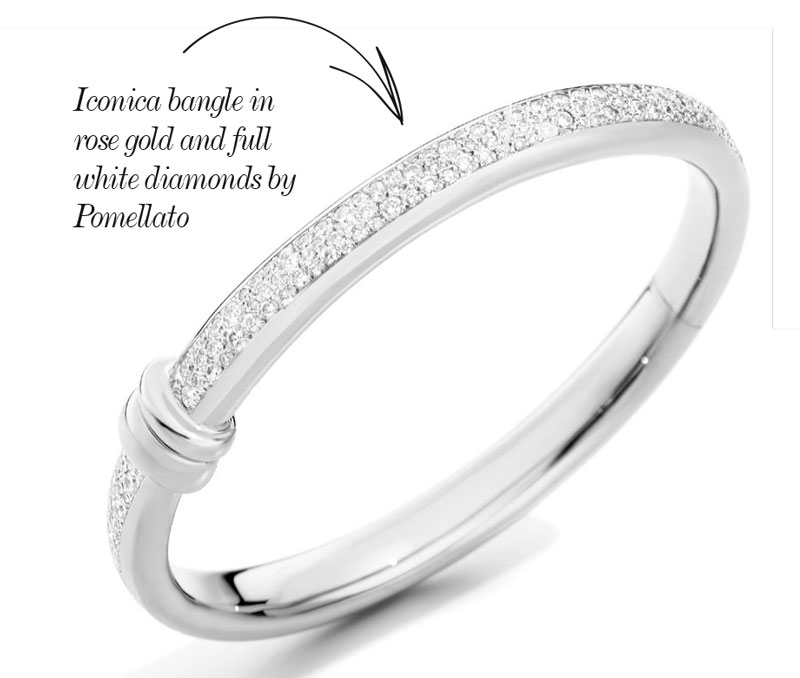 For two layers that reveal both Pomellato’s goldsmith and diamond prowess, the Milanese maison presents a parure of rose gold in the form of an Iconica two-layer ring – one of gold and one of 32 diamond pavé gems. To complement, a shining solid gold bangle accentuated by a small 18 diamond circle accent, or, in a reverse design, with the pavé diamonds set into the entirety of the bracelet with 251 pavé diamonds. Instead or as well, Iconica drop earrings shimmer from the ears encrusted with 136 pavé diamonds, to complete the look.

With its Sabbia collection, Pomellato was exquisitely inspired this year, producing several pieces that play on the volume of its simple circle or rectangle design. The new bracelet with mesh gold links seems to almost recall a precious ‘chain mail’ design, graced with asymmetric circles of precious pavé, as 539 brown, white and black diamonds render the wearer truly unforgettable. To match, the choker necklace incorporates 970 diamonds of similar hues with a sassy circle clasp design that drops behind the neck. Four circles of diamond pavé are encrusted atop the finger in a fantastic ring with 111 diamonds in total. As complement, the necklace version combining white, brown and black diamond circles and rectangles can be singly, doubled or even tripled around the neck, depending on the look. For more musicality in movement, the sautoir pairs with any other piece from the collection, featuring 225 brown, white and black diamonds held by multi-sized chain links of eccentricity. Spectacular drop pendant earrings low from the lobes with 606 black and brown diamonds that fade to white – almost like precious charcoal dipped in the snow. 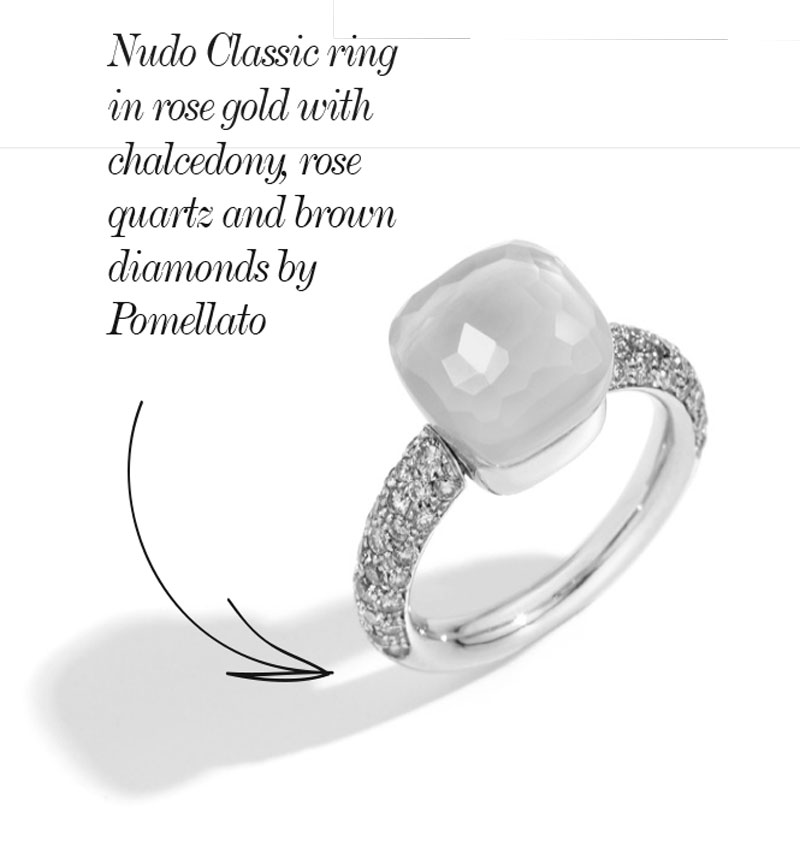 With Tango, Pomellato demonstrates its gem-setting mastery in a white gold ring with 126 smoothly-set diamonds. For the wrist and neck, a matching bracelet (915 diamonds) and necklace (2021 diamonds), with shimmering pavé set into each diamond chain masterpiece. Revealing the colours of its true nature, Pomellato displays brightly coloured bracelets, each set with 744 gemstones of either chromo tourmaline, red spinel, blue sapphire, purple sapphire, ruby or emeralds.