This design watch is a statement of creative freedom and freespirited individuality. In defiance of the rush and frenzy of today’s world, the Millenary Frosted Gold Philosophique puts time on women’s side, its single hand defying contemporary conventions of time measurement. 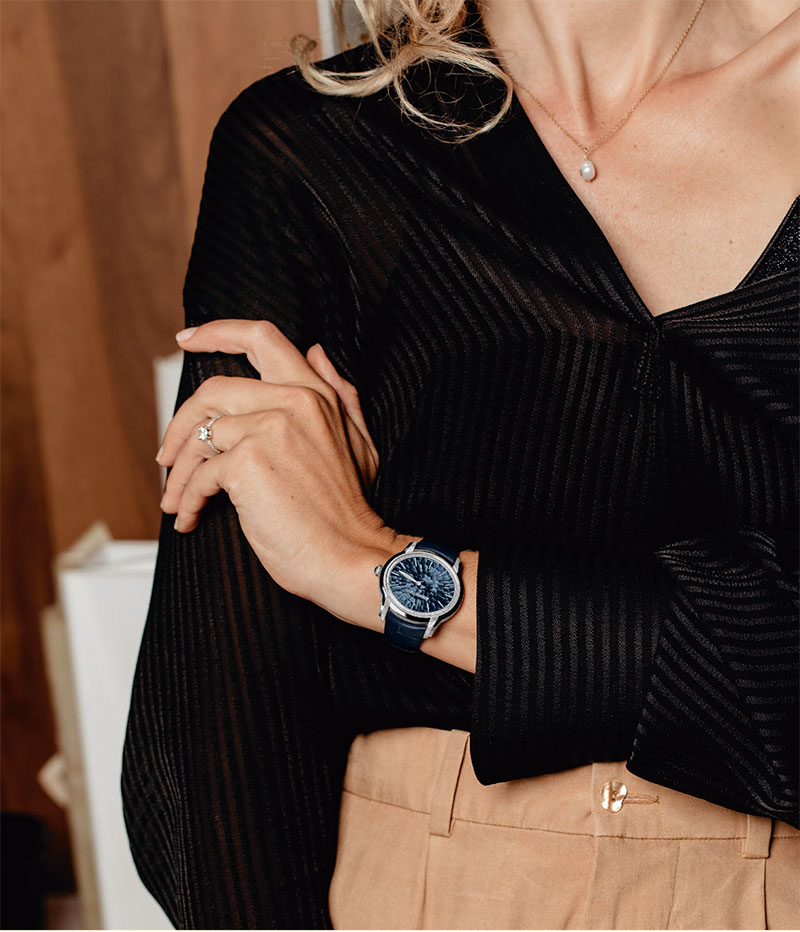 This abstract watch has been meticulously hand-finished by their watchmakers, in the highest respect for Audemars Piguet’s traditions. The 18-carat pink or white gold case presents alternating satin brushing and Frosted Gold finishing, a technique Audemars Piguet owes to Florentine jewellery designer Carolina Bucci. The diamond-dust effect it creates results from hours of meticulous micro-hammering. 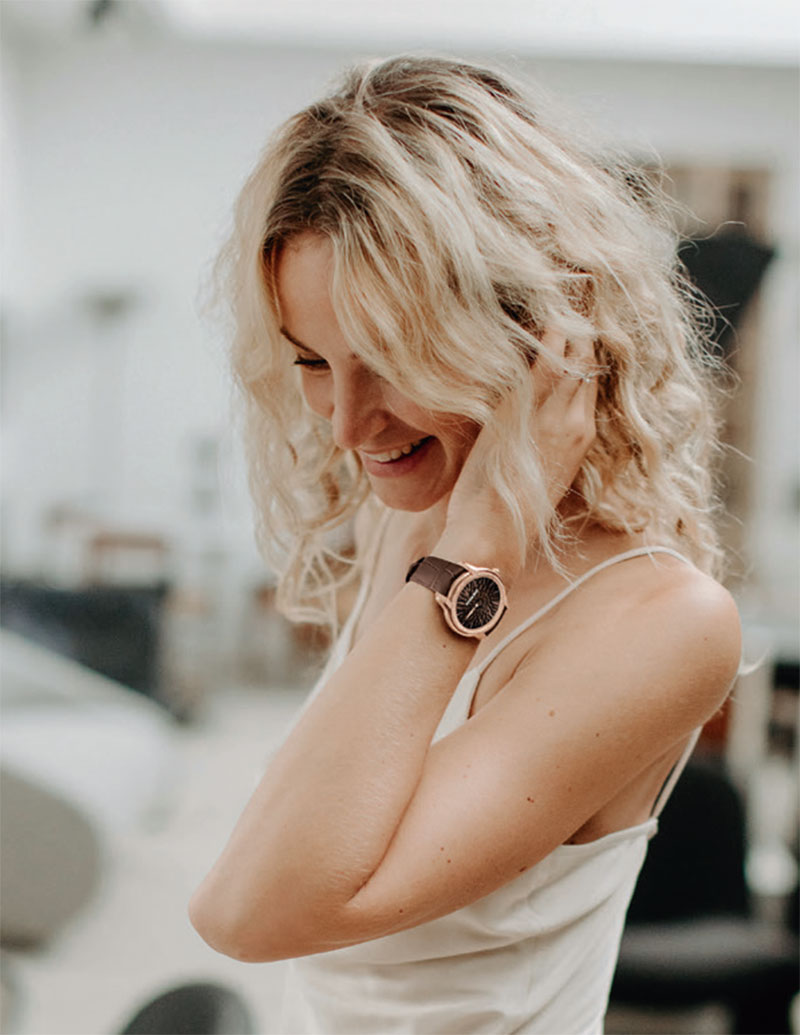 Adding a subtle touch of colour, the see-through caseback reveals the oscillating weight, which coloured plates recall the hand-crafted dimpled dial in shades of brown or blue. The single hour hand is polished and sand-blasted. Adding to the current hand-wound collection, this watch is equipped with a new selfwinding movement, calibre 3140. This movement is endowed with a patented mechanism which ticks the hand around the dial in an elliptical trajectory. The hour wheel directly corresponds with a transparent disc on the dial, on which the single hand is mounted. This enables the hand to follow a clear trajectory despite the elliptical case. 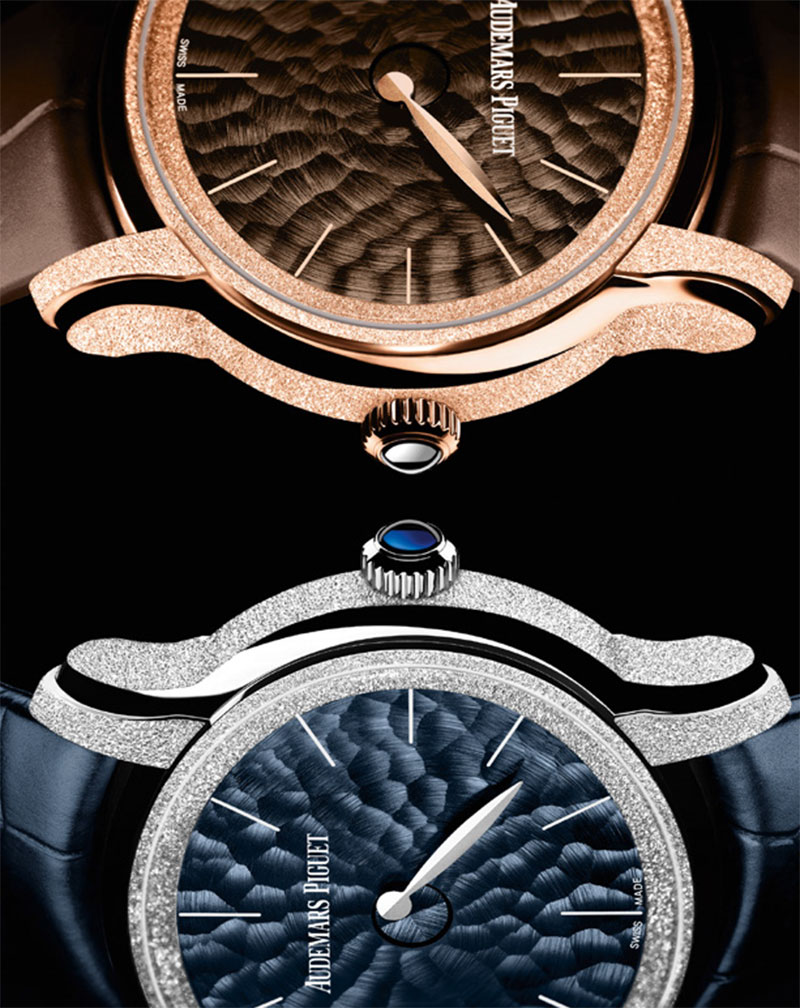 MILLENARY: A CANVAS FOR CREATIVITY

Since its establishment in 1875, Audemars Piguet has crafted mechanical watches for women, ranging from timeless classics to avant-garde artistic creations, all suited to the evolving nature of women’s lifestyles. Combining technical mastery, creative aesthetics, optimum ergonomics and refined finishing techniques, these creations have challenged expectations over the years, while honouring the highest level of Haute Horlogerie and gem-setting traditions.

Since it first appeared in 1995, the Millenary has been a canvas for creativity with its elliptical case, eccentric dials and visible hand-wound movement. Inspired by architecture and art, this watch of contrasts intertwines technical savoirfaire and innovative design. While the collection was originally conceived for men, the first models for women made their appearance in 1998, becoming more prominent over the years. Since 2015, the collection has been exclusively designed for women presenting off-beat and multifaceted models endowed with a wide array of materials and finishing techniques, including chamfering, satin brushing and Frosted Gold Finishing. 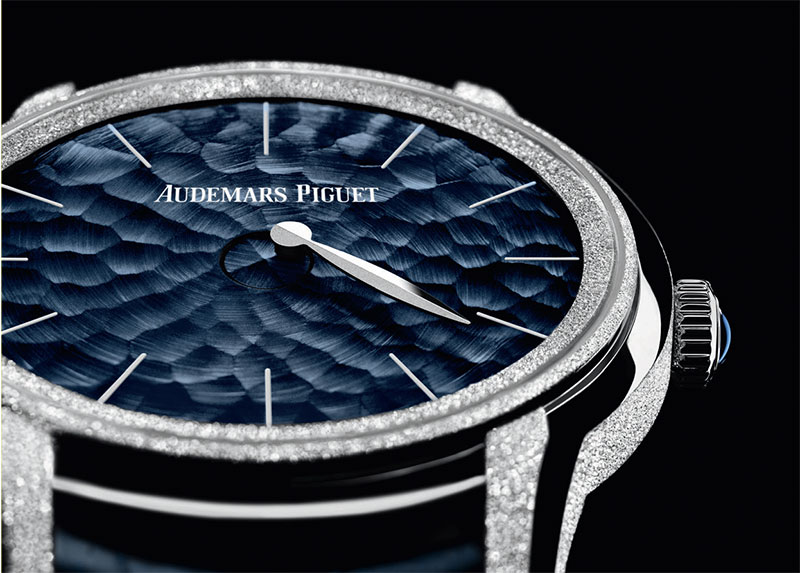 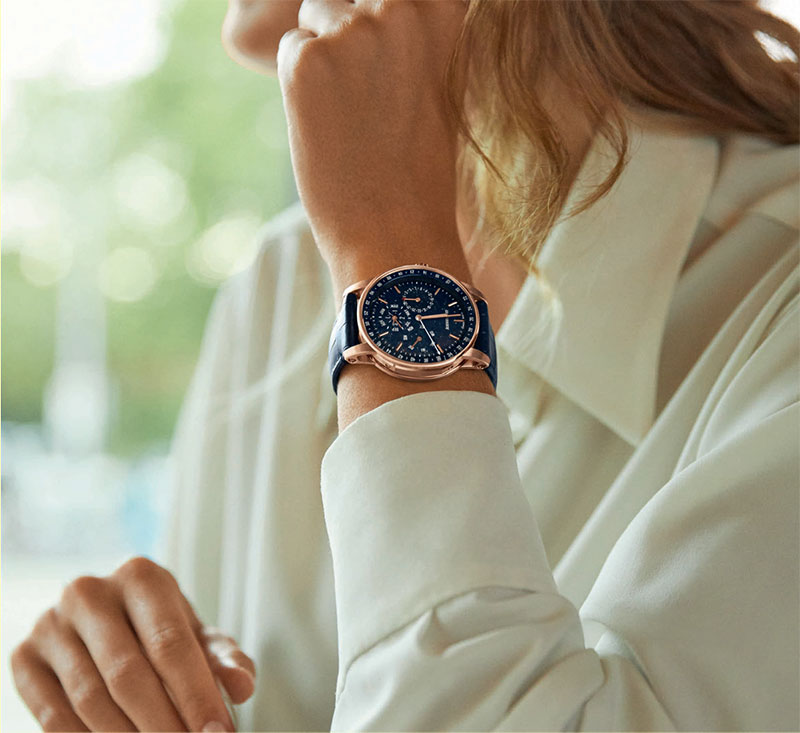 A SUBTLE TOUCH OF COLOUR

A new assortment of leather straps brings refined hues of blue, brown, grey and pearl are added to the collection.

The straight integration of the strap in the continuity of the lugs, which have been welded to the extra-thin bezel, reveals the refined hand-finishing techniques adorning the case’s unconventional and multifaceted architecture. 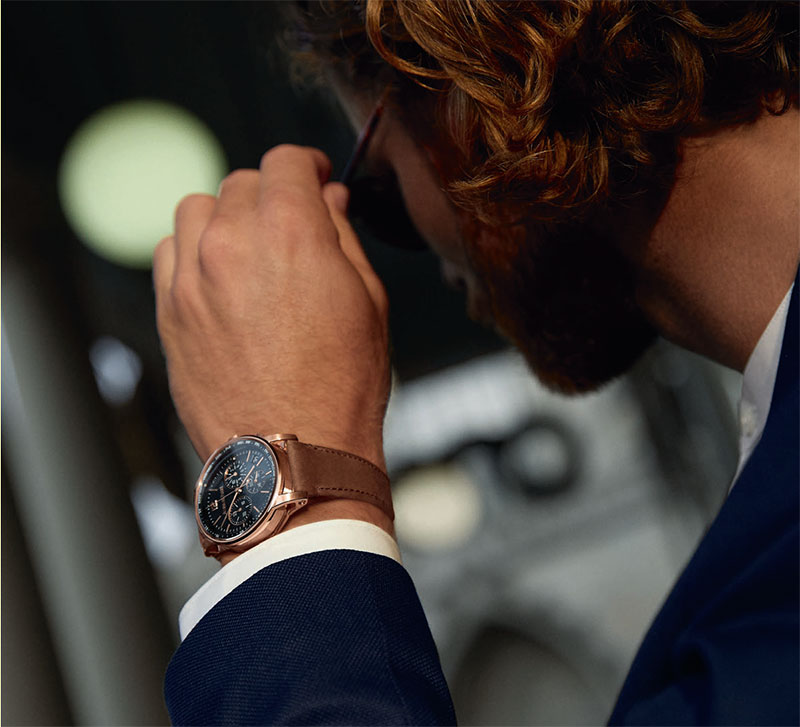 Consciously designed for women and men—a first in the Manufacture’s history—Code 11.59 by Audemars Piguet refutes gender boundaries. The complex case composed of an octagonal middle case embedded in a round bezel and caseback has been conceived to adapt to different wrists. Its optimum curved ergonomics makes it comfortable for all to wear despite its 41mm in diameter. The case’s arched profile also embodies the watch’s innovative design. The collection’s contemporary and sober aesthetics adapts to different looks. 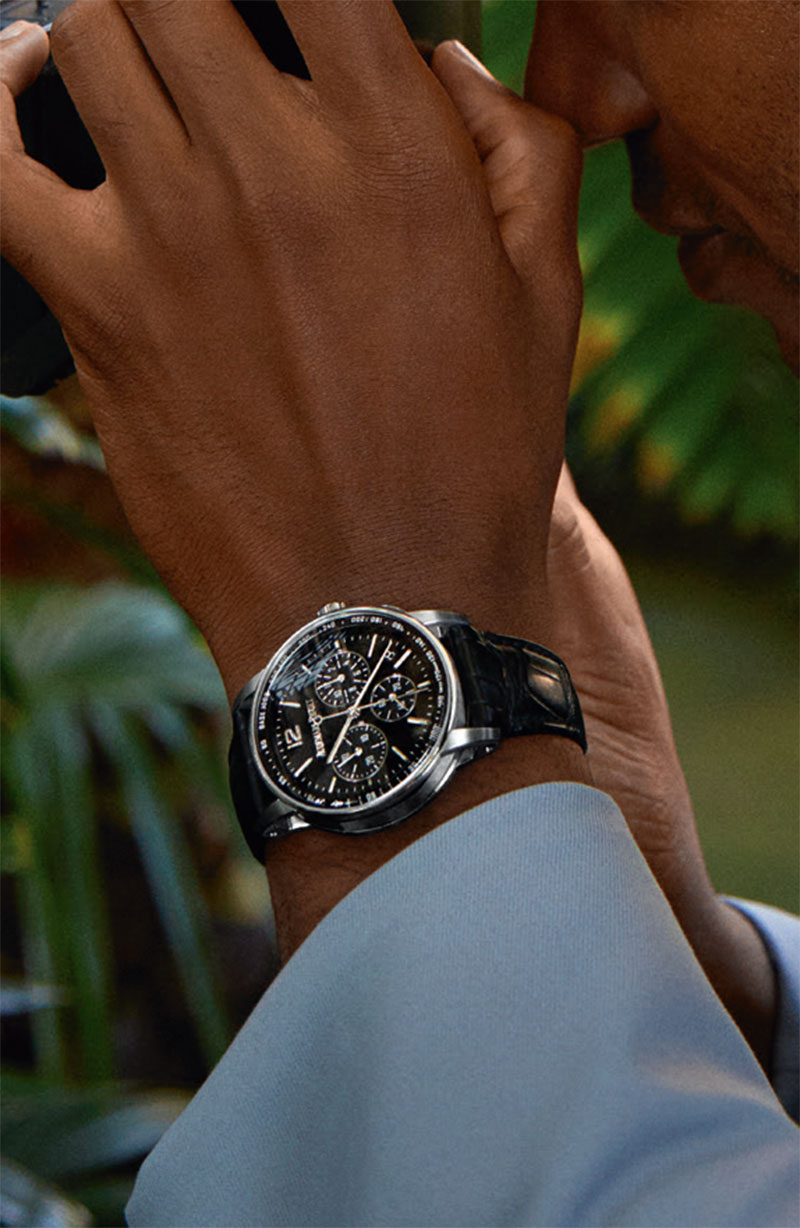 Code 11.59 by Audemars Piguet represents the most comprehensive launch in the Manufacture’s history with 13 references, including 4 complications and 3 new calibres: an integrated chronograph with column wheel and flyback function, a self winding movement with seconds and date indication and a selfwinding flying tourbillon calibre. Hand-decorated to the slightest detail with refined finishing techniques, these movements unite tradition and innovation.

Constantly on the brink of tomorrow, the collection will present new evolutions this 2020! 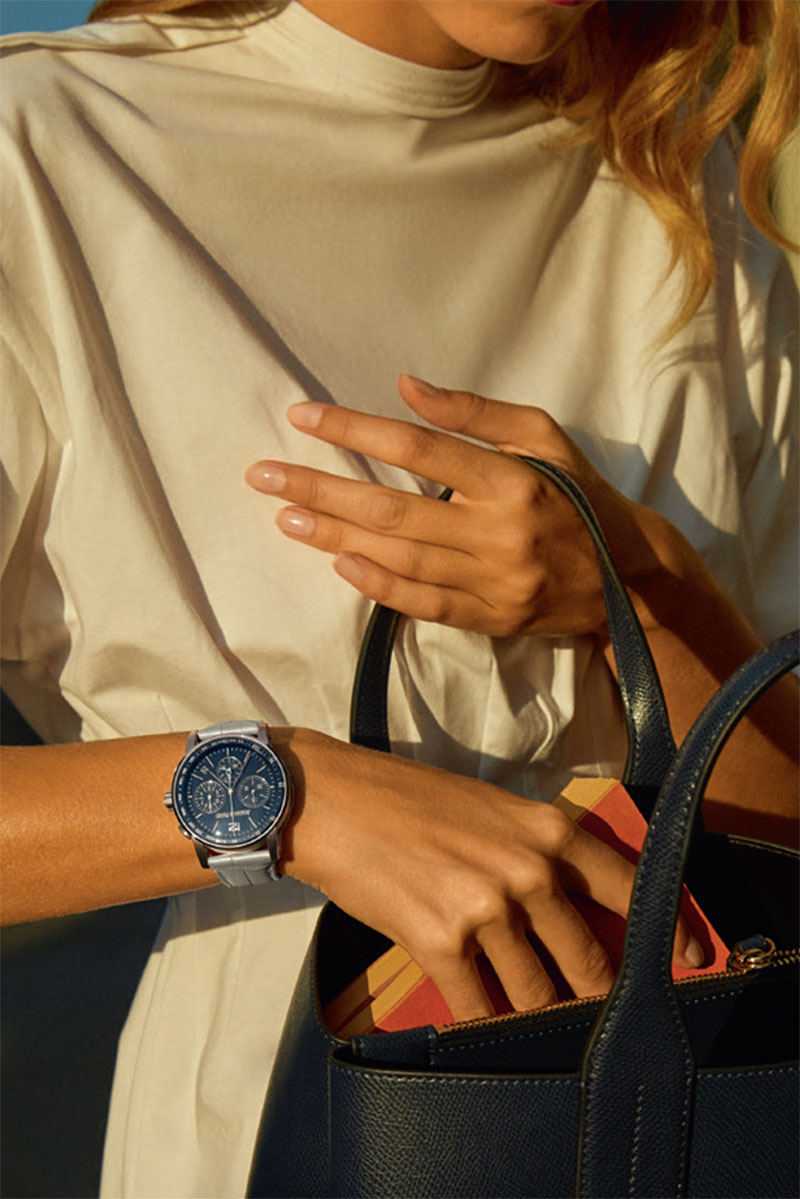