When women support each other, incredible things happen. And that’s what Mary-Justine Todd, Founder and Executive Director of Shamsaha, practices every day. 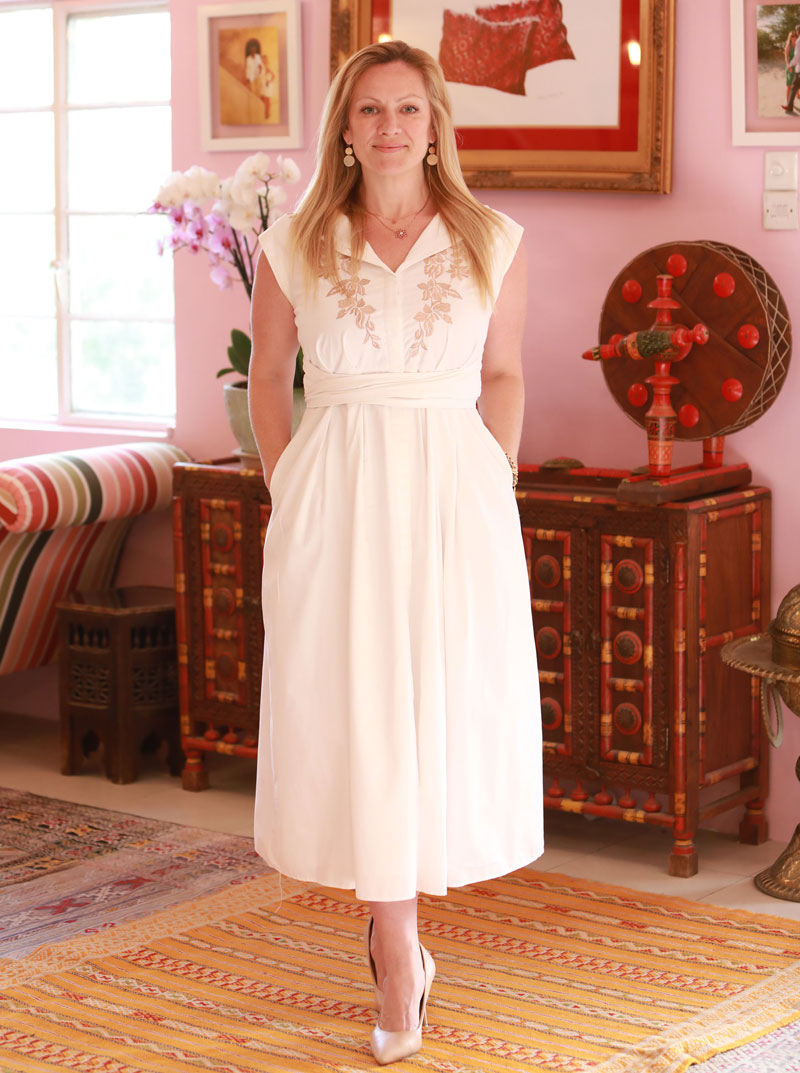 “Being alone during a time of need might be one of the worst things that can happen to someone.” – Mary-Justine Todd

OHLALA – Tell us a bit about yourself and how you came up with Shamsaha? How was the path to arrive at this non-profit organisation?

Marie-Justine Todd – While living in New York City, I was a volunteer at Columbia University Hospital’s rape and violence crisis response programme called DOVE. During my time as a crisis advocate, I ultimately became the President of the Advisory Board, learning in great detail how the programme functioned. I left NYC and embarked on an Eat Pray Love-style adventure, taking me through many countries and eventually to Bahrain. I kept with me, however, the small programme manual from DOVE. I started poking around and found that, although there were many great organisations in Bahrain, there were no crisis programmes for victims of abuse. So, with the help of my husband and many Bahraini women I met along the way, we launched Shamsaha’s full-scale operations in 2016, making it the first and only domestic and sexual violence crisis response programme in the Middle East.

OHLALA – What have you achieved that makes you the proudest since Shamsaha was created?

MJT – Women are hurting. People are suffering. And being alone during a time of need might be one of the worst things that can happen to someone. So, I am most proud of the help we have provided for women who otherwise might have been totally by themselves. I am pleased that in a country where it has never been done before, we have managed to bring together hundreds of women, expatriate and Bahrainis, to help thousands of women during what may have been one of the most challenging moments of their lives.

OHLALA – What do you think was the biggest challenge you had to face?

MJT – Most definitely financial challenges. I started Shamsaha with nothing more than an idea for a programme, hope to do something good, and less than BD300. But over the last five years, we have gone from just me working out of my living room to a 220sq/m office [sponsored by Harbour Towers West], eight staff members and 140-plus volunteers, with thousands of women served. But it didn’t happen without great struggle and great partnerships. And now we are launching our regional expansion programme, hoping to make our services available to potentially millions of women over the coming decade throughout the GCC for the first time.

OHLALA – Speaking of Shamsaha’s expansion programme, tell us more about your partnership with the L’Oréal Fund for Women?

MJT – As part of L’Oréal’s ongoing efforts and commitment to supporting women’s rights, the L’Oréal Fund for Women has partnered with Shamsaha to help our mission to protect, advocate, and empower women in Bahrain and across the GCC. We are working on expanding Shamsaha’s crisis programme services, virtually and in-person, to the UAE, KSA, Oman, and Kuwait. We will also utilise the sponsorship from the fund to streamline the further development of our soon-to-be-launched mobile application. The app will facilitate emotional, logistical, and informational support to domestic and sexual abuse victims across the region.

OHLALA – Is there any woman that served as an inspiration to you?

MJT – My mother passed away this year on March 15. Because of Covid-19, I could not be with her during the last year, or even in the final months of her life, since her nursing home was on a total lockdown. Watching my mother die over WhatsApp was the hardest thing I have ever had to endure. But as I contemplate her life and what she has given to me over the years, I have come to realise that nobody served as a better role model than she was. She taught me to be kind and to be bold. She taught me that I could do anything I wanted, and that no country was too far and no person was too different. She taught me to treat people with dignity and respect and always, without fail, to be honest. I would not be a fraction of the person I am today without her steadfast model of an ethical and principled person.

OHLALA – What’s your motto in life?

OHLALA – What do you do that allows you to disconnect from work?

MJT – The best thing that helps me, and I believe has the potential to help many people, is spending time with my dog. I think that we have a great deal to learn from animals, and spending time with them helps human beings connect to the natural world and reconnect with aspects of ourselves that sometimes get lost in this digital age. I also teach yoga, so about five to six mornings a week, I am doing or teaching yoga from my home-based studio. This helps a great deal to disconnect.

OHLALA – What piece of advice do you give to young ladies out there starting their careers?

MJT – Remember that nothing comes easy. And nothing is ever as easy or perfect as it looks on social media. Whatever it is that you want to do, or to be be it a lawyer, an international aid worker, a mother, a mechanic, a mountain climber, it will take work. Don’t take shortcuts. Don’t get illegitimate online ‘certificates’ and assume that looking good on Instagram is enough. Do the work that is required to become highly qualified. Know your trade and be prepared to work hard. Play the long game – not the short.

WORLD OF GEMS AND GOLD