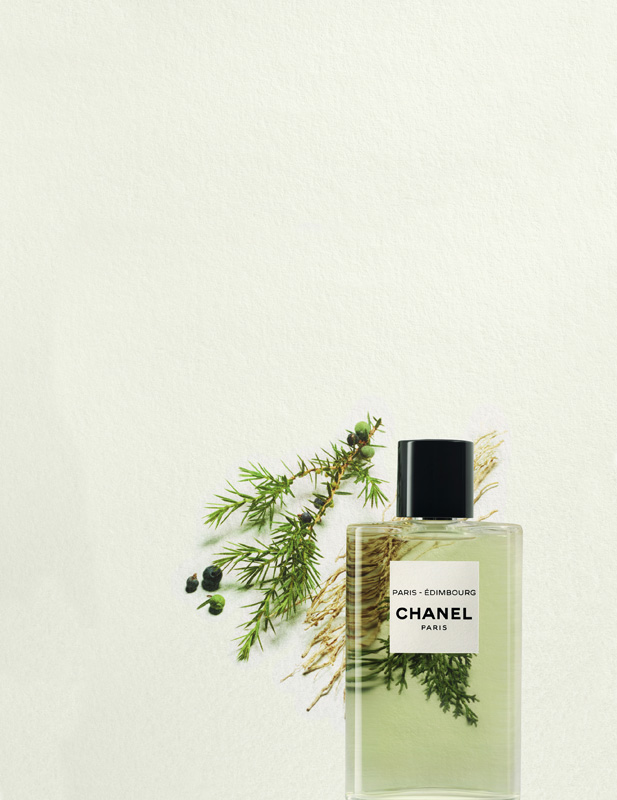 The LES EAUX DE CHANEL collection was introduced in 2018 and is composed of fragrances inspired by Mademoiselle Chanel’s favourite places in the world. The first three fragrances released were PARIS-BIARRITZ, PARIS-DEAUVILLE and PARIS-VENISE, followed by PARIS-RIVIERA in 2019. Olivier Polge, CHANEL’s house perfumer, in cooperation with the CHANEL Laboratory of Fragrance Creation and Development, has now orchestrated a fifth olfactory journey – PARIS-ÉDIMBOURG.

More than destinations, LES EAUX DE CHANEL are countless invitations to escape for no reason to a dreamy place, be it by the sea or in the countryside. “LES EAUX DE CHANEL were designed as light and refreshing ‘eaux fraîches’. I drew inspiration from the destinations that have strong ties with CHANEL. Each one has left its mark on a fragrance, ” explains Olivier.

Immersed in the great and mysterious Scottish countryside, the perfumer was struck by two characteristic odours: juniper berry and peaty wood. This tension between incisive freshness and warm shadows spurred the idea of a scent with the power of aromatic plants in the tradition of British men’s colognes. He highlighted the lively and distinctive notes of juniper berry and cypress, added a hint of lavender, then chose cedar for its enveloping comfort and vetiver for its earthy and slightly smoky accents. Lastly, he warmed the scent with notes of vanilla and musk.

This is how PARIS-ÉDIMBOURG, the earthiest, most androgynous and woodiest of LES EAUX DE CHANEL, became a reality. “It could be the fragrance of a tweed jacket borrowed from a man’s wardrobe that was such an inspiration to Gabrielle Chanel,” tells Olivier. “Like the scent after a stroll through the countryside, it is steeped in the odours of the wild landscape.”

Soak up The Sun