Travel
1 week ago by Ohlala Team
0 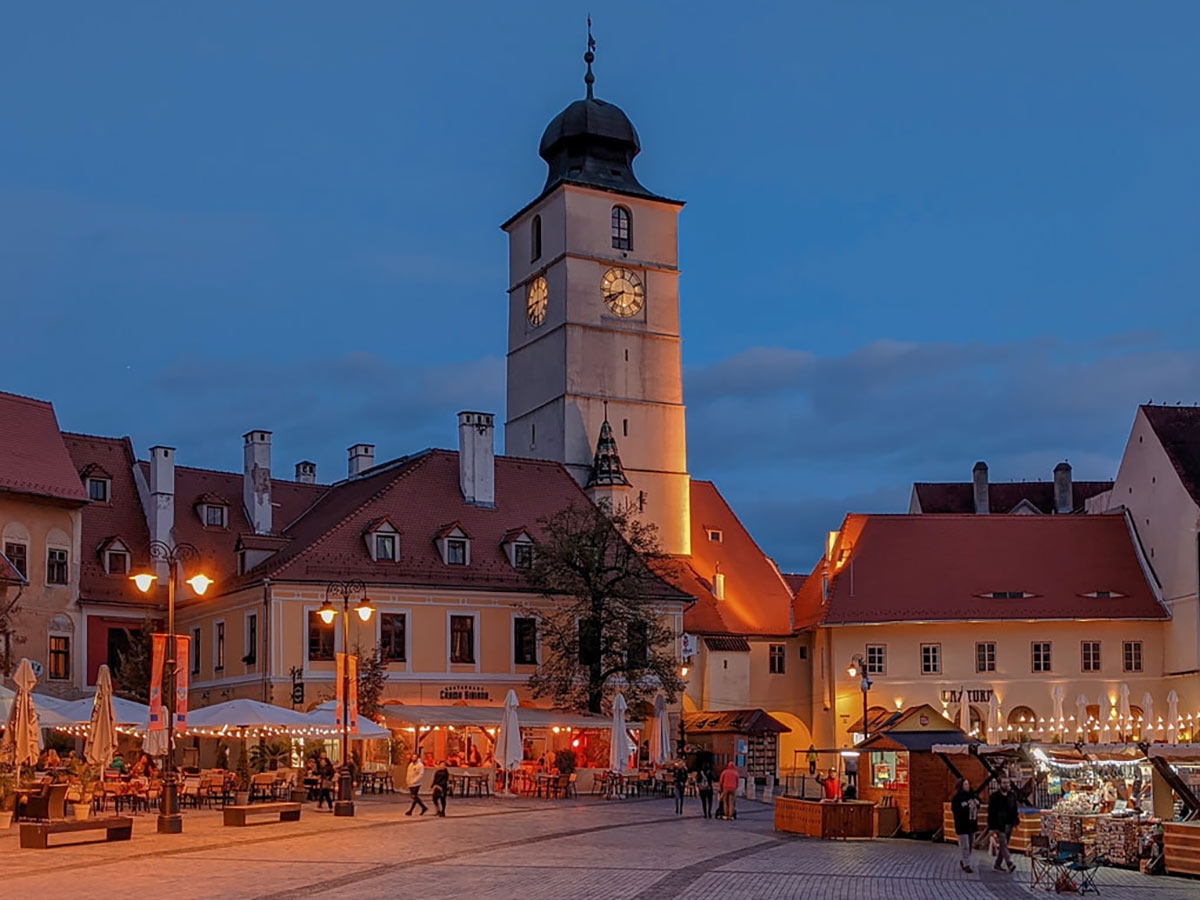 Looking for a glorious getaway full of architectural history, abundant greenery and cultural beauty? Romania might just be the place for you!

Known for its Transylvanian roots, this eastern European country is adorned with beautiful cathedrals and edifices rich with Ottoman, Saxon and Austro-Hungarian heritage, weaved with hidden natural marvels at every corner, and brimming with a prolific modern cultural atmosphere. The towns of Brasov, Sighisoara and Sibiu especially offer this ultimate blend of old and new, central and remote. 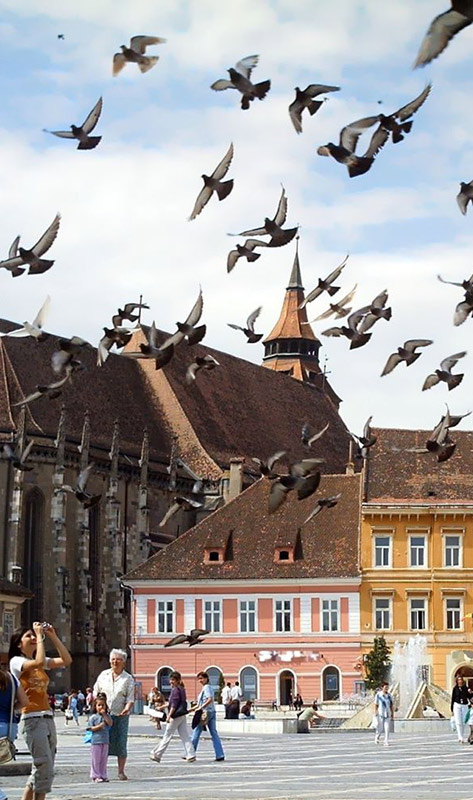 A charming town in the middle of Romania surrounded by mountains, including the well-known Muntele Tampa, or Mountain Tampa, Brasov is known as a melting pot of culture, history and magnificent architecture. It was first founded in the 13th century and developed into one of the most important commercial towns in the region.

Located 170km north of the capital city of Bucharest, it is home to the famous Black Church, one of the most beautiful sites of Gothic architecture and a must-see for anyone passing through this town. It was partially destroyed on many occasions, most notably by the Great Fire of 1689 whence it got its name. The restorations thereafter incorporated Baroque designs giving way to some of its Gothic beauty, which you will be able to observe. It has the largest collection of Oriental rugs in Europe, 110 to be precise, dating back to the 1400s and 1500s. You can get a ticket for 10 lei (around two Euros) for adults and 3 lei (a little more than a half Euro) for children at the shop next door, which also sells souvenirs, crafts and other items such as candles, notebooks, bookmarks and art sets. 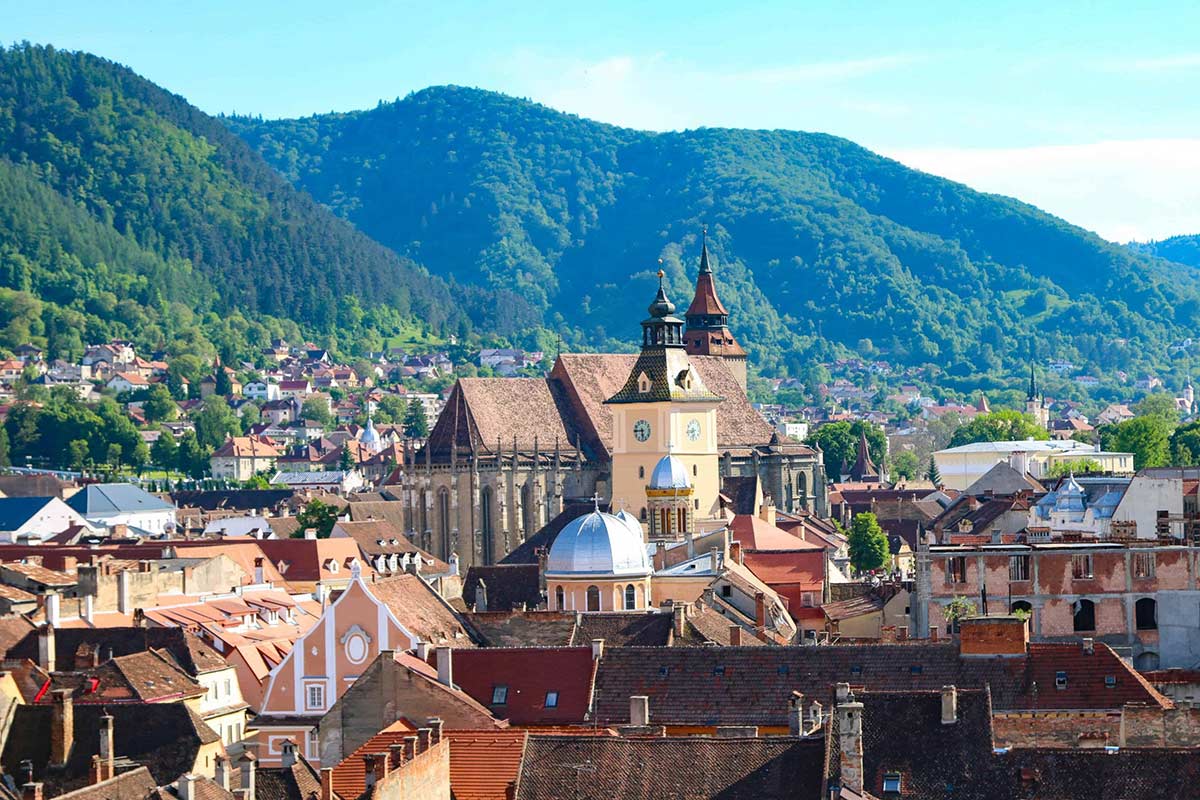 You may want to take a stroll through the main town square, sit by the fountain, and order a plate of Polenta – a traditional Romanian dish made of corn. Next, visit the Council House, originally a watchtower, which was built in the 15th century. Brasov is also home to Strada Sforii, or Rope Street – one of the narrowest streets in Europe, with a width of 1.32m.

If you happen to pass by Strada Michael Weiss, look up at the windows of the yellow house on the corner. If you’re lucky, you will see the old lady perched there – a rather chatty character always busy talking to people down below on the street.

While you are there, don’t forget to pass through the Graft Bastion located on the northwest side of the town’s fortress. You can take a stroll through the ramparts and enjoy the soothing sound of the brook running alongside, then climb the narrow steps up to the White Tower on the hill to catch a view of the town below. If you haven’t exercised for a while, this might be a bit of a trek, but it will be worthwhile!

Speaking of high places, you may want to take a trip on the cable car going up to Mountain Tampa, where the popular Brasov sign stands overlooking the town. You also have the option of hiking to the top, but beware of the bears that lurk amidst the forest.

If you are staying for a while in Brasov, you can take a 45-minute bus to the legendary Bran Castle from terminal two at the bus station. This 14th-century landmark of Transylvanian history is now popularly associated with Bram Stoker’s Dracula. The Irish writer famously never visited Bran; he depicted the castle merely based on a description of it. Tickets to this beautiful salute to Romanian history cost 45 lei (around nine Euros) for adults and 10 lei for children. 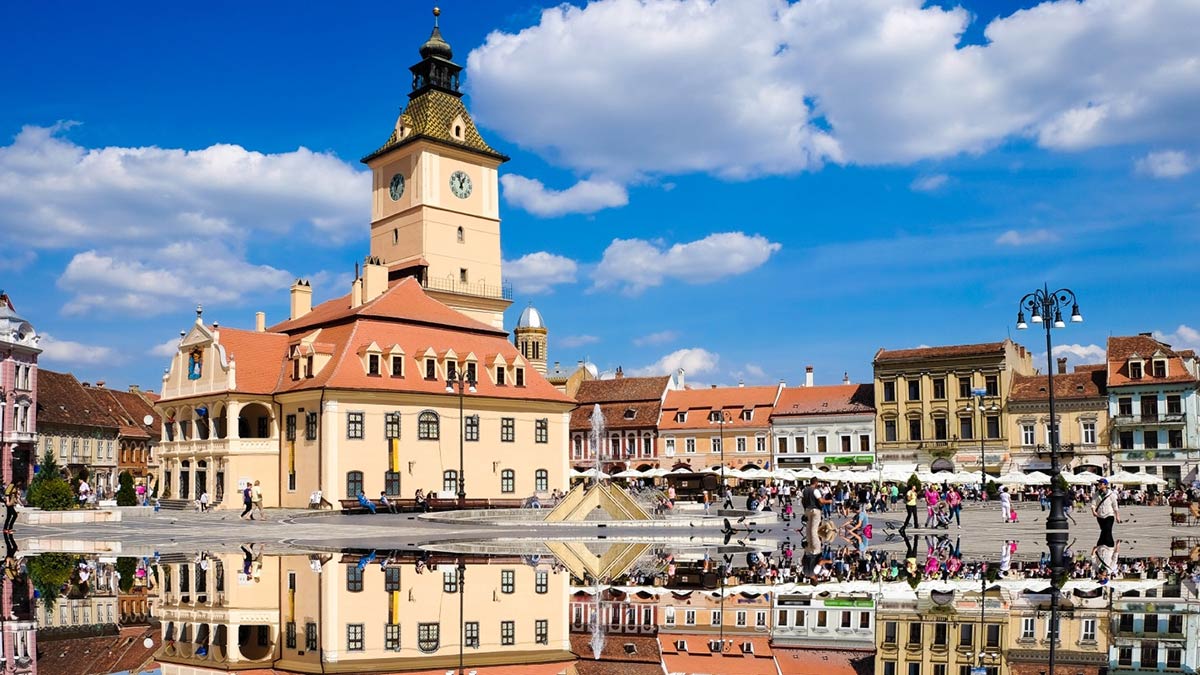 Apropos castles, if you have a little more time, take the train to Sinaia, dubbed the ‘Pearl of the Carpathians’ and home to the exquisite Peleș Castle, a summer palace built in 1874 for King Carol I, that served as a residence for the royal family until 1947. It was the first castle to have electricity in Europe, and all its 160 rooms were individually designed. You can also take the Gondola Sinaia, the highest cable car in Romania, up to the Bucegi mountains at an altitude of 2,050m. The view is simply breathtaking, and if you’re there during winter, you can head towards the ski slopes for a fun day of skiing as well!

Take a three-hour train ride from Brasov to reach the little town of Sighisoara. Known for its rich Saxon history, laden with narrow labyrinthine cobbled lanes and lined with a myriad of coloured houses, this small town’s beauty can be observed in every nook and cranny. But the jewel in the crown has to be the 14th-century Clock Tower located at the heart of the town. After the fire of 1676, one of the gateways was converted into a prison, which you can see, along with the torture instruments used on prisoners. The balcony now offers a magnificent view of the town. A new Baroque-style roof was also built after the fire by Austrian architects, and both the clock mechanism and the little statues representing each day of the week were rebuilt, too.

Another beauty of this little town is the Scara Acoperita, or the Covered Stairway, built in 1654 as a safe passage for pupils to get to school on top of the hill. Still standing today, the 300-step wooden tunnel is a must-see for anyone adventurous. Once you reach the top, you will be able to visit the old school, as well as the church on the hill. 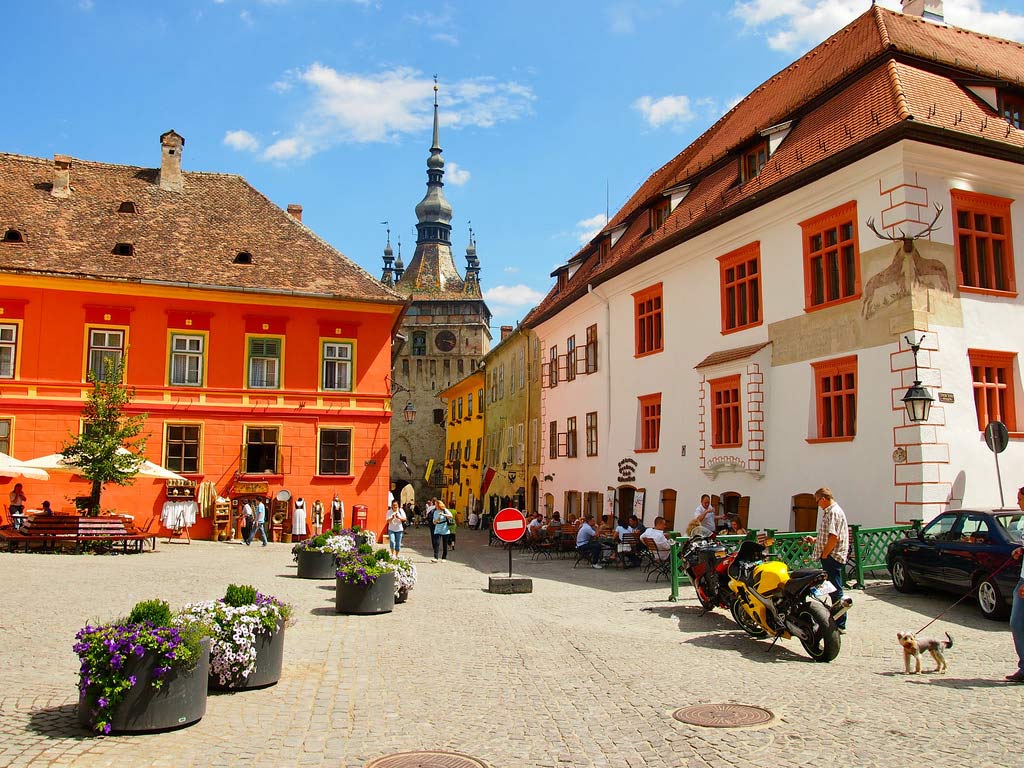 The Breite Oak Tree Reserve is a hidden gem in this part of Romania: a 74-hectare haven of towering oak and hornbeam trees hundreds of years old. Located on the largest grassland plateau in Europe at an altitude of over 500m, this serene sanctuary is a 45-minute walk away, and a 20-minute car-ride away from Sighisoara.

Sibiu provides a further look into the history of Transylvanian times, with classical buildings and architecture drenched in historical significance.

While you are in this beautiful town, you don’t want to miss the Piata Mare or the Big Square, home to much of Sibiu’s rich heritage and yearround festivities. Head down there for a stroll and a relaxing afternoon with the pigeons, and make sure to visit the Holy Trinity Orthodox Cathedral, adorned with classic crimson, royal blue and gold architecture, similar to the colours of the Romanian flag. This 20th-century building incorporates a mix of neo-Byzantine, Baroque and Transylvanian styles. During World War I, three of its four bells were famously melted by the Austro-Hungarian empire to use as canons and were not replaced until 1926.

The Pasajul Scărilor, or the Stairs Passage, that snakes through the town, is a peculiar historical treasure of Sibiu. The 13th-century meandering stairway umbrellaed with archways connects the town’s upper quarter, home to beautiful historical sights, and the lower quarter, fringed with vividly-coloured buildings. 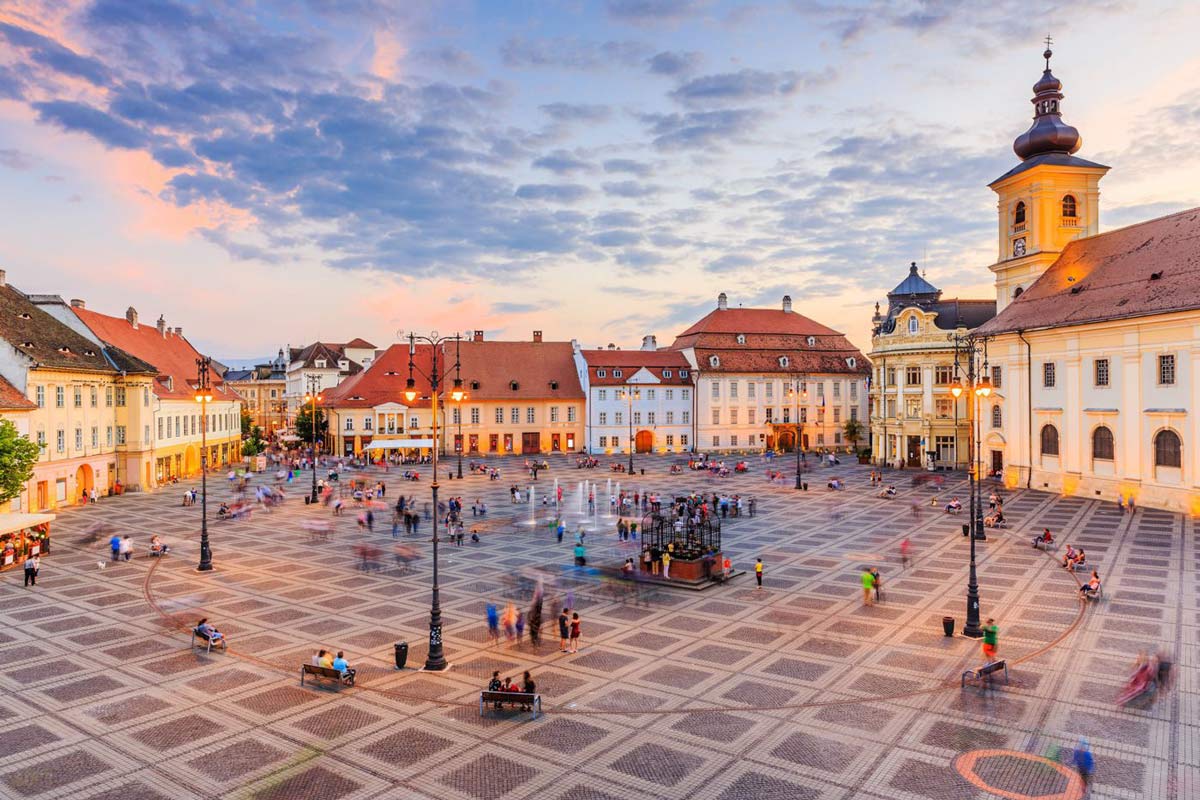 While at the Piata Mare, make a stop at the Brükenthal Museum, a treasure trove of Romanian history and art. It was named after Baron Samuel von Brükenthal, who was the only representative of the Saxon community in Romania holding a position at the high office of the Austrian Empire in the 18th century. While in Vienna, the baron started collecting valuable paintings and other art, eventually holding one of the most valuable private collections. The museum features this collection and, over the years, has expanded to include other art collections as well as museums, including the European Art Gallery, the Museum of Natural History and the Pharmaceutical Museum.

The ASTRA Museum located in the Dumbrava Forest is another mustsee. The open-air 96-hectare ethnographic museum is a prized spectacle for Romanians and an epitome of Transylvanian history. It depicts traditional rural life in the 18th and 19th centuries featuring conventional huts, mills and churches. The easiest way to get to this cultural refuge is a one-hour walk along the Pârâul Trinkbach River from the Piata Mare.

Last but not least is Alba Iulia, another national gem and cherished historic site located on the Mureș River and an hour’s drive away from Sibiu. It was once the capital of the principality of Transylvania and in 1918 it was also the site where the unification of Transylvania and Romania was made official. Once you’ve admire this star-shaped historical locale, take a stroll in the town surrounding the fortress or rent a bike and zip through its many winding paths – just be careful not to smash into other tourists!