Culinary
1 week ago by Ohlala Team
0 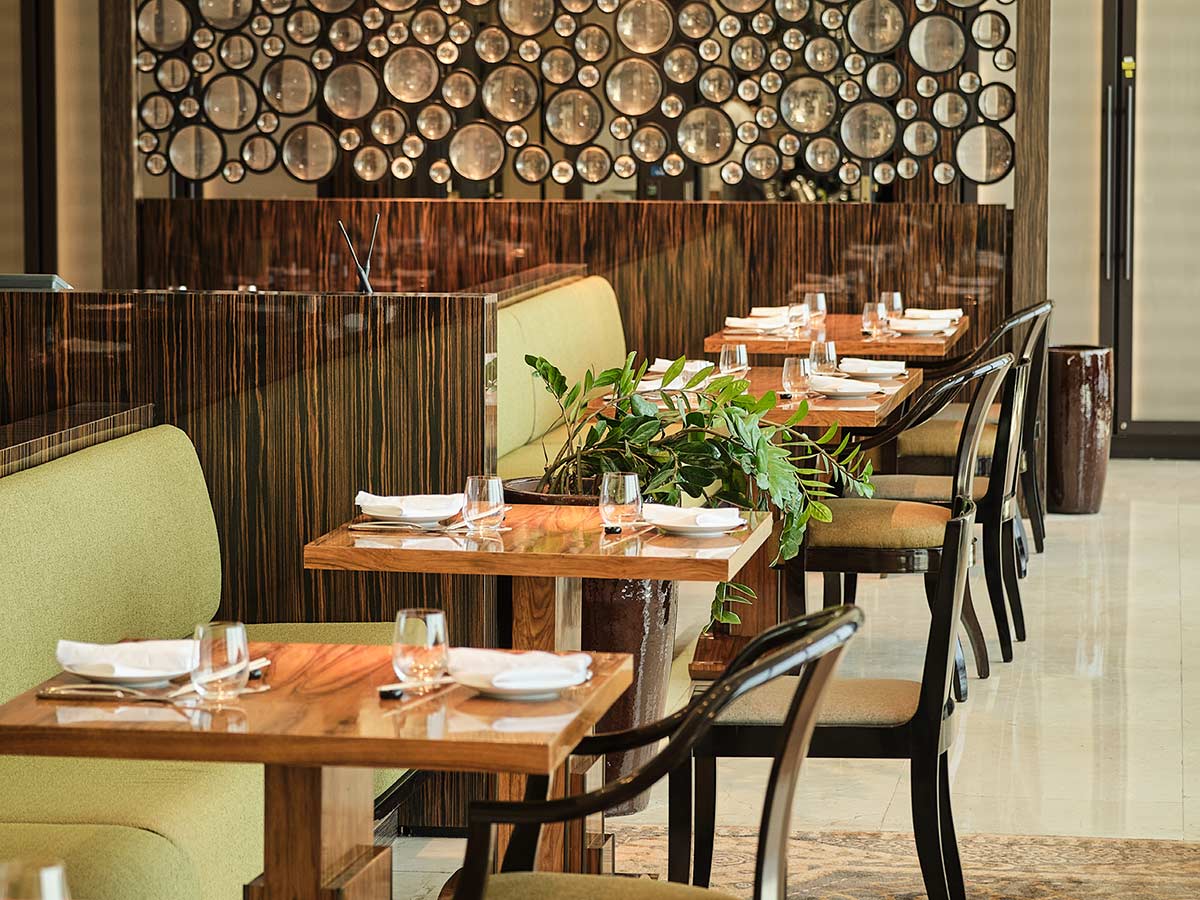 Let’s get this out of the way right at the start. I love re/ASIAN. Having sat with celeb Chef Wolfgang Puck in Dubai as he described his plans for this new concept, which was to debut in Bahrain, then attending the opening night, followed by many visits since, I would be remiss if I didn’t confess more than a little bias. The restaurant re-opened in September 2021 after being closed for 18 months due to Covid-19. It is now showcasing a renovated ambience and new items on the menu.

The ride up to the 50th floor in the lift still made my ears pop, and nobody had moved the stunning view of the city skyline far below, so that was a good start. But, on entering, you will now encounter a glass-surrounded sushi bar with high stools, which were pretty much full the whole night. Once shown to our table and trying hard not to be mesmerised by that view, I ordered my all-time favourite of Spicy Tuna Tartare in Sesame Miso Cones. I have said before and will say again now, if I had to go to re/ASIAN and eat one thing all night, these would be it. Super-fresh raw tuna with chilli aioli topped with shaved bonito and encased in crispy cones. This dish, for me, is the food of the gods, the amazing bursts of complementary flavours coupled with the crunchy, salty sesame seeds is absolute perfection. 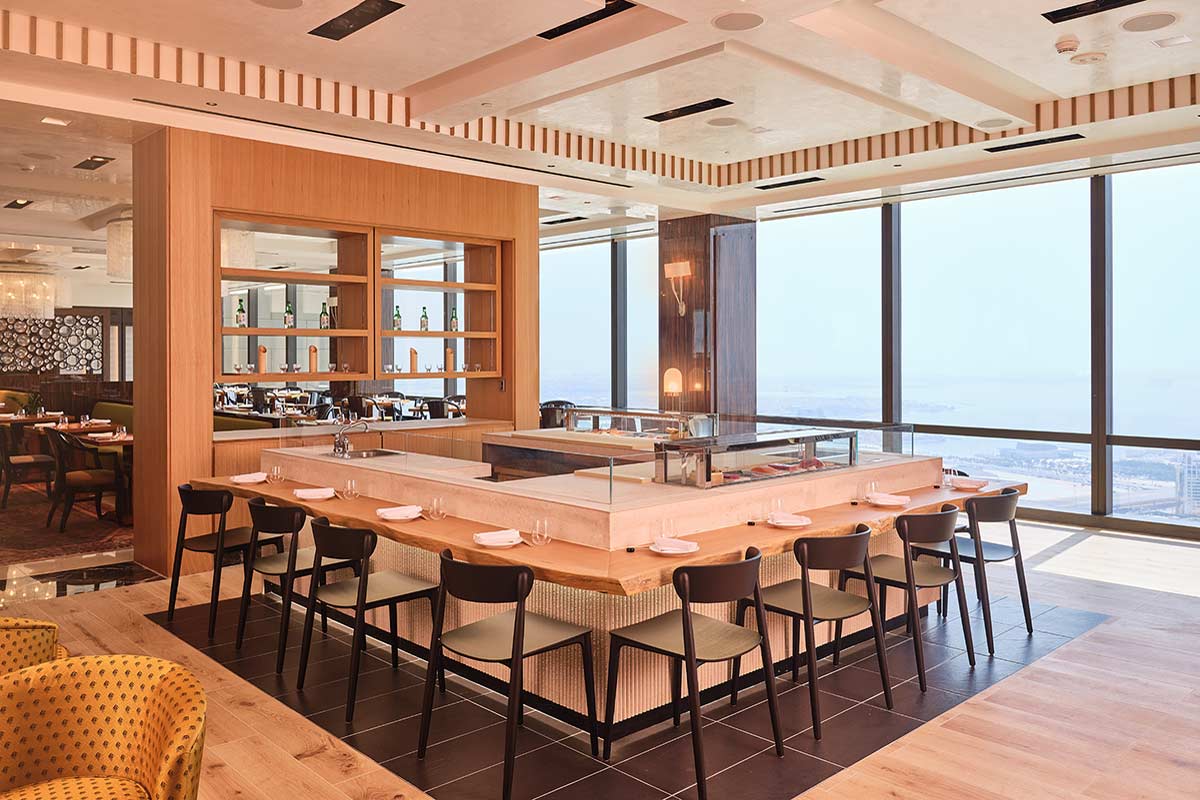 My dining companion is vegan and, on this score too, re/ASIAN didn’t disappoint. For every course there was a tasty alternative for her. No fuss whatsoever as our knowledgeable server, Vanessa, brought forth a selection of sushi rolls set on crispy rice, which was crunchy on the outside, soft on the inside and well seasoned, and boasting toppings of asparagus, avocado, mushroom, baby carrot and, the star of this particular show, eggplant liberally flavoured with soy sauce. We had not asked in advance for vegan dishes, so this was particularly impressive – as was the silence from the other side of the table!

Along with my cones, I had been ‘ordered’ to try the scallop ceviche. Well, my friend didn’t steer me wrong. He said I would love this, and I truly did. The thinly sliced seafood with miso, chillis and edible flowers was superb in both texture and flavour. More power to that new sushi bar – thus far we were loving it. Being a little greedy, we both ordered extra dishes before the mains. My companion went for the Steamed Bao with braised jackfruit and toasted chilli soy. The buns were so soft and deeply satisfying. I, meanwhile, had gone for the XO Shrimp Dumplings with crispy garlic, Chinese chives and fermented black beans. The sauce on these is slightly sweet made from fermented scallop and shrimp paste and it is truly the crowning glory, perfectly offset by the kick of the chives. Boasting plenty of chunky shrimp this would be a satisfying lunch dish with just a dessert. Then came the mains. Oh, the mains! I had gone for the signature Braised Beef Short Ribs Peanut ‘Rendang’ and, right away, I could see I’d made the perfect choice. Big chunks of four-hour-braised beef, redolent with the flavours and aromas of coconut milk, chilli, ginger, galangal, turmeric, garlic and more. My taste buds were in seventh heaven, the rich veins of fat running through the meat giving that extra succulence that allowed the flesh to literally melt in the mouth.

My companion’s plate looked very similar to mine but, instead of the meat, bore large chunks of exceptionally well-presented tofu. Seared to perfection, it had absorbed the myriad of flavours from the seasoning and actually caused a little squeal of delight to escape her lips. She coupled it with rice noodles with a liberal serving of Shimeji mushrooms. 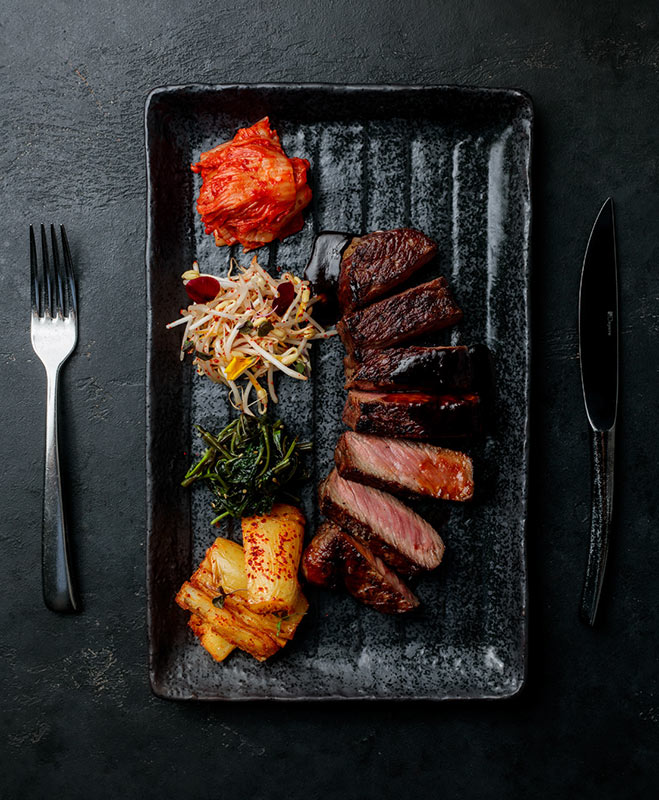 We ended our feast with Mango Millefeuille with Kolak ice cream for me. This looked and tasted amazing, but the unexpected star was the Re/ Pavlova – a vegan meringue, made with aquafaba, served with coconut mousse, citrus cremeux and pineapple sorbet. If ever there was a reason to go vegan, this might well be it. A surprisingly tasty and satisfying dessert that looks great. You’d never know it was vegan if they didn’t tell you. So, did the revamped re/ASIAN Cuisine pass muster? Well, suffice to say, I’m going back next week, and the week after that…