We’ve plucked terminology that you can find all over the fashion scene – season in, season out – for you to impress your style tribe this SS20. 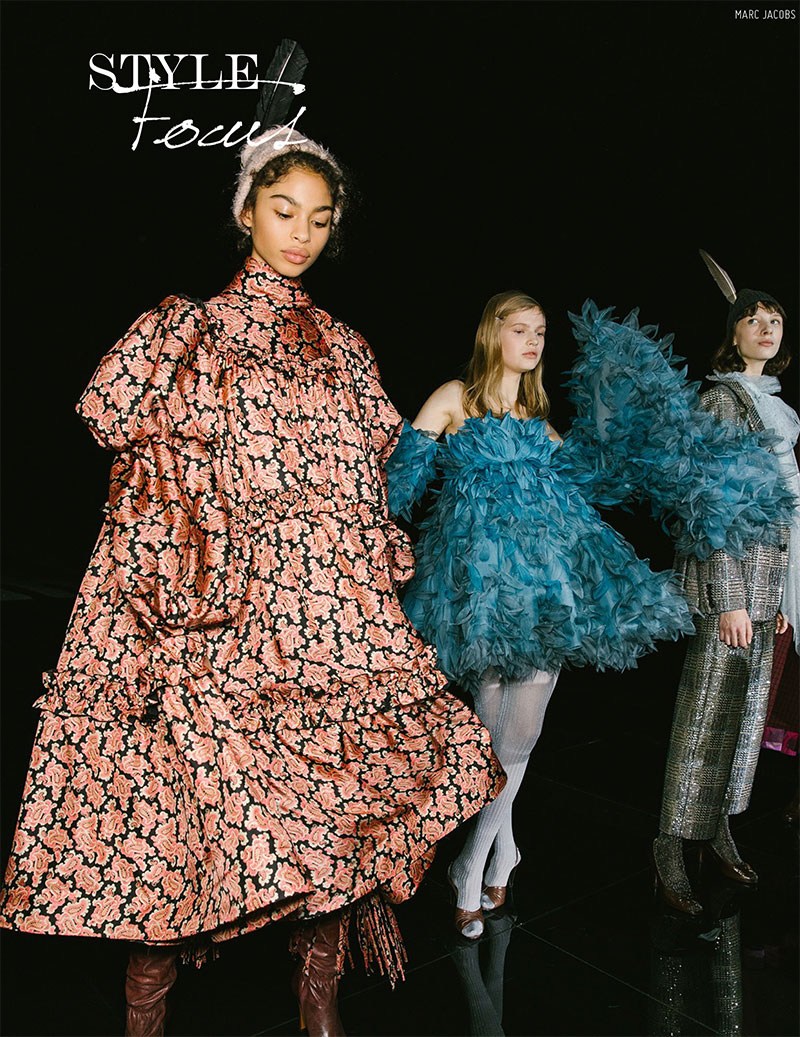 A is for A-line
Style line for apparel in which the dress fits at the shoulder or the skirt at the waist and gradually flares out to a wider hemline, causing it to resemble the letter A. The earliest A-line designs were created by Christian Dior in the 1950s.

B is for Batwing
Sleeve that fits closely at the wrist but widens to be very full under the arm. From the back, the sleeve resembles a cape. Its name comes from its resemblance to the wing of a bat or its similarity to a type of coat worn in the late 1800s that had a cape-like sleeve. 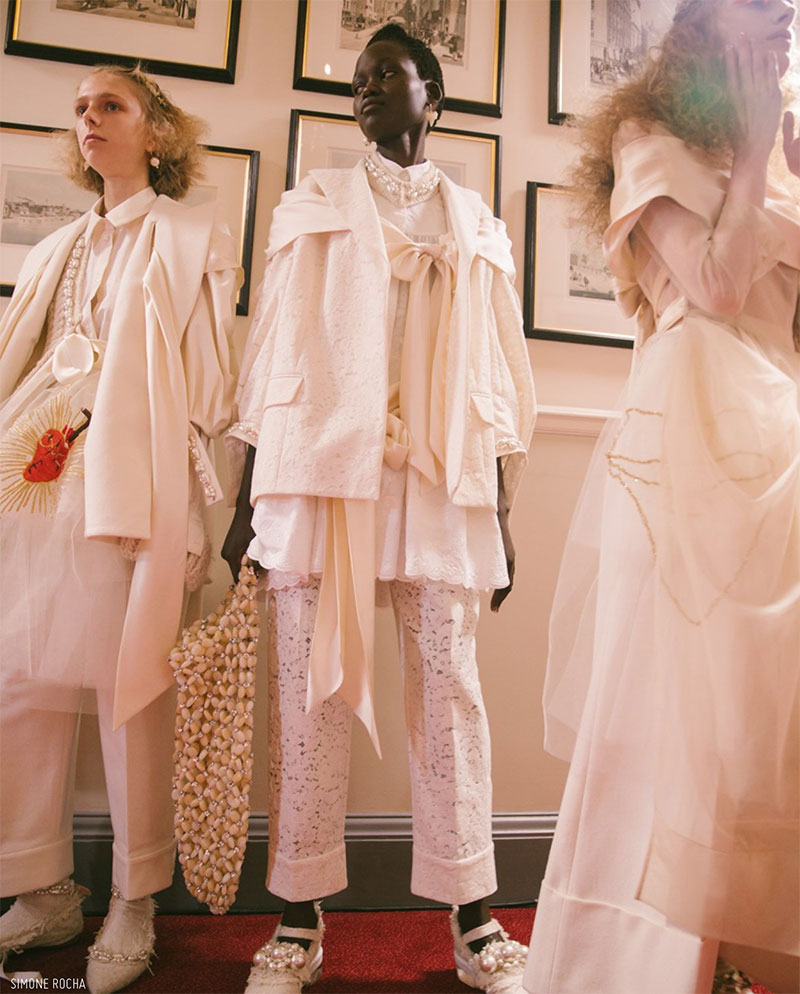 C is for Camisole
In the 19th century a camisole was a waist length undergarment worn over a corset. Generally it had broad straps, and tied at the upper edge with a drawstring. Often it was trimmed with lace or eyelet embroidery. In modern usage, the term may refer to any undergarment worn over a brassiere and ending at the waist. Blouses or tops that are cut in a style similar to the historic camisole are called camisole tops.

D is for D’orsay Shoe
Refers to any shoe that has a closed heel and toe but which is cut down to the sole at the sides. It can be made with a heel of any type and any style of vamp (front). The style is one of several fashions named after the Count d’Orsay, a fashionable dandy living Paris in the mid-1800s.

E is for Empire Waist
Location of the waistline just under the bustline. The name of this style comes from the high-waisted styles popular during the reign of the French Emperor Napoleon Bonaparte (1804-1814).

F is for Fashion Tribes
Current fashion has moved away from one universal style for all and instead various segments of the consuming public, especially the young, are likely to dress in fashions that show that they belong to a particular group or a style tribe.

G is for Gathers
A means of distributing fullness in some part of a garment by sewing a loose row of stitches, pulling the thread, and sliding the fabric along the thread to make soft folds in order to decrease the width of the fabric. n shirring three or more rows of gathers are placed parallel lines to achieve a decorative effect while also manipulating fullness.

H is for Hems
The lower edge of a part of a garment that has been finished off with some type of sewing to cover the raw edge. Among the more common types of hems are: plain hem that is turned up and sewn into place; rolled hem used on sheer or delicate fabrics and rolled up by hand into a narrow hem that is sewn with small hand stitches; and faced hem, which is finished with a piece of fabric sewn to the bottom of the garment edge and then turned up to the underside and sewn into place. 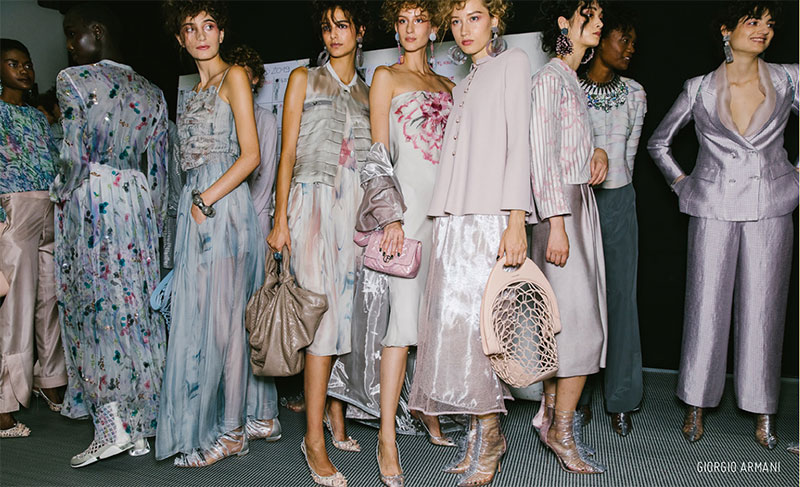 I is for Influencers
Influencers, or sometimes referred to as key opinion leaders, are a group of individuals that have risen among the ranks (mostly through social media) based on the number of followers they have and many of which have become brand ambassadors for a variety of fashion labels.

J is for Jacquard
Jacquard fabrics have raised patterns that are woven into the fabric, instead of patterns that are merely printed on. Depending on the types of yarns used, a jacquard can vary from minimallooking variations to more ostentatious designs with the use of metallic yarns.

K is for Knit
A knit is a type of fabric that’s created using a technique where yarn is looped around. As compared to woven fabrics, a knit tends to be more malleable and stretches more easily.

M is for Macrame
A hand technique for making small pieces of fabric and trimmings by knotting from two to four or more yarns, strings, or cords into a variety of decorative patterns. Macram™ has been fashionable periodically and is most often seen in belts, handbags, vests, or as trimmings. Sometimes beads are incorporated into the design of the fabric.

I think there is beauty in everything. What ‘normal’ people perceive as ugly, I can usually see something of beauty in it.” — Alexander McQueen 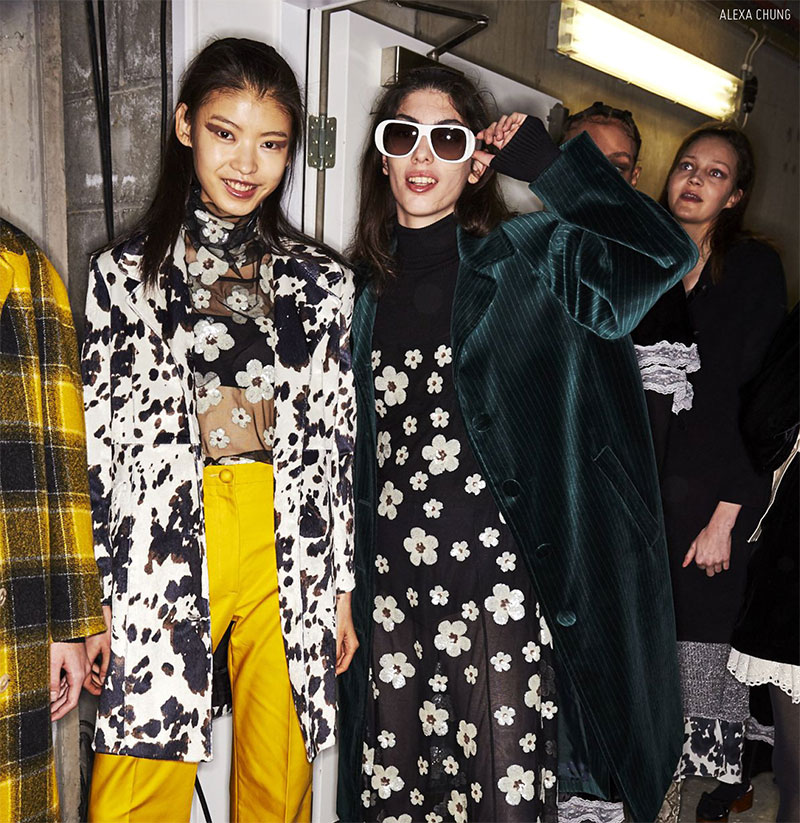 N is for Niche
Niche fashion caters to only a specific group in society. Types of niche fashion can include gender-blurring fashion, vegan clothing and even haute couture—all catering to a small segment of the community at large.

O if for Oxford
A basic shoe style that either laces shut or is closed with some other fastening. Details of styling and cut will vary. Originally, the term was used by shoemakers to distinguish between low cut shoes and boots. Today the major distinction is in the fact that the shoe has a closing.

P is for Pagoda Sleeve
A sleeve that is shaped much like an Asian building called a pagoda. Like a pagoda, the sleeve is narrow at the top where it fits the upper arm closely, then gradually flares out to become wide at the bottom. The shape is similar to a funnel, and so this sleeve style may also be called a funnel sleeve.

Q is for Quality
The mark of true luxury fashion is the quality. This refers to the way that the garment is made from the creation of the fabric to the final finishing of the piece. A quality piece of work is one that could potentially last for a very long time.

R is for Ruching
Current fashion descriptions use the term ruching to refer to clothing with large areas of fullness gathered in to form a rippled effect. Historically, ruching was a trimming made by pleating bands of fabric and stitching the pleats in place. These bands were sewn onto various parts of the garment.

S is for Shift
A basic dress style that has simple, straight lines and does not fit close to the body. Very popular in the 1960s and in other periods when unfitted styles are popular. One innovation in this style in the 1960s was the incorporation of a diagonal dart running from the side seam to the bustline. In comparison, a sheath is a simple, straight, but fitted dress in which vertical darts, bust darts, and shaping from side seams provide the fit. 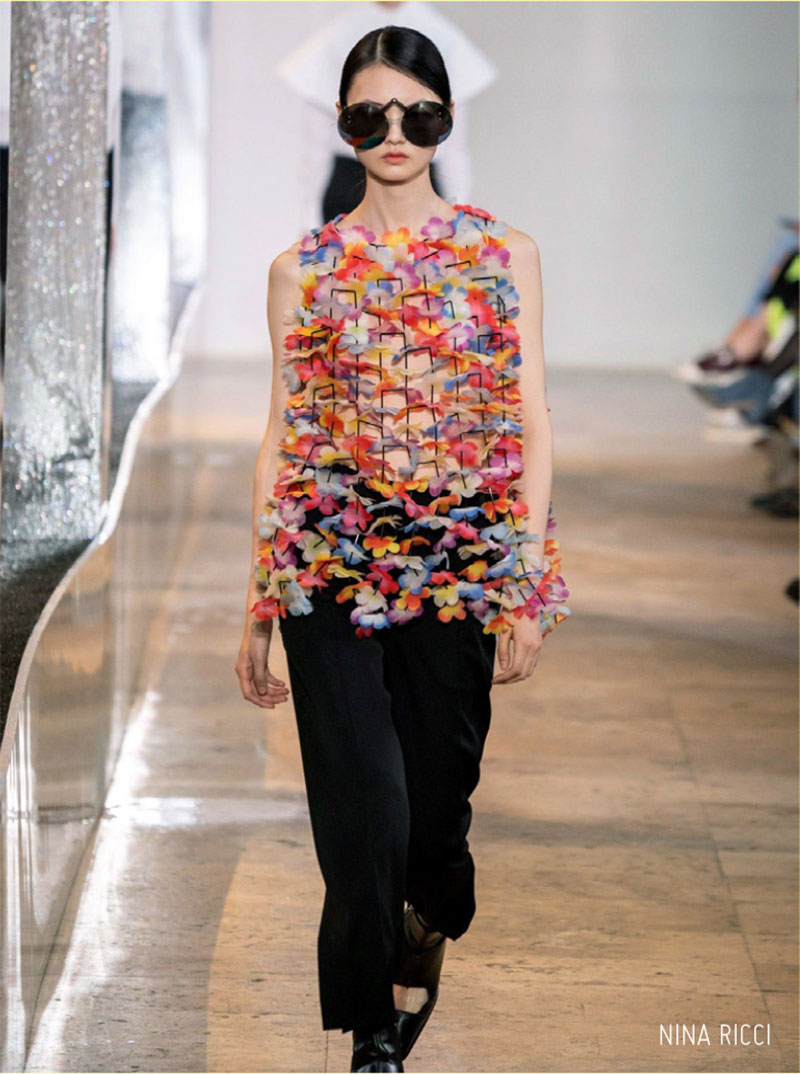 T is for Tie Dye

A method of decorating a garment or fabric by tying string or other material around pre-selected areas in order to prevent dye from being absorbed by these areas. The unprotected area takes up the dye, the tied area does not. To get multicolored effects, the fabric can be tied in other areas and dipped in another colored dye. This process can be repeated as often as desired.

U is for Unstructured

A garment that is unstructured means that it has no structural design support such as boning and padding. An unstructured garment, when hung, should drop instead of appearing stiff.

V is for Vintage

Fashion items that are at least 20 years old are considered vintage. The act of buying vintage can be seen as the most environmentally friendly way of buying fashion. And if something has been in pristine condition for the past 20 years or so, it would probably last much longer.

W is for Watteau Back

The back of a garment in which box pleats are placed at the center back and the fabric released by these pleats falls loosely to the bottom of the garment. The name of this style derives from Jean Antoine Watteau, a French artist of the 18th century, in whose paintings women wore dresses with this design feature. The name was not applied to these designs until the 19th century. Today the style continues to be popular, especially in nightgowns and robes.

X is for X

In fashion, X denotes a collaboration between two brands. It is incorrect to refer to the X as ‘by’, since in a collaboration, there shouldn’t be one party that’s more significant than the other.

Y is for Yoke

A yoke is a shaped pattern piece which forms part of a garment, usually fitting around the neck and shoulders, or around the hips to provide support for looser parts of the garment, such as a gathered skirt or the body of a shirt.

Z is for Zip

A zip is a fastener formerly known as a clasp locker, is a commonly used device for binding the edges of an opening of fabric or other flexible material, such as on a garment or a bag. 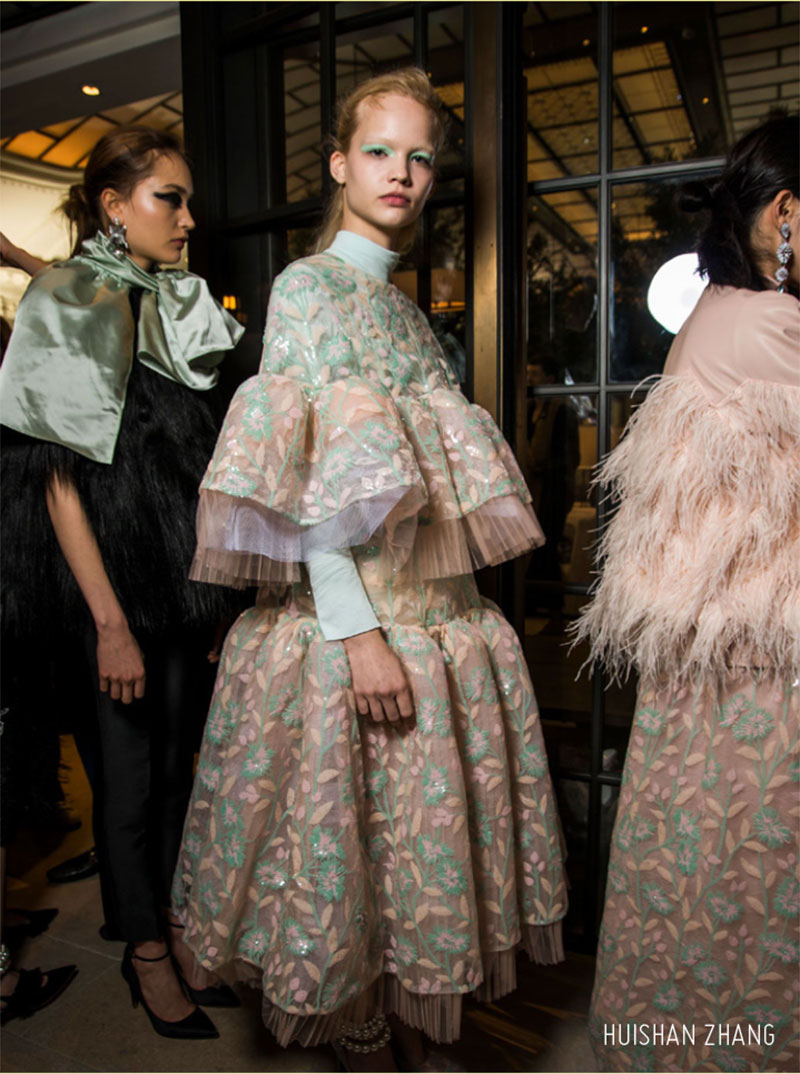 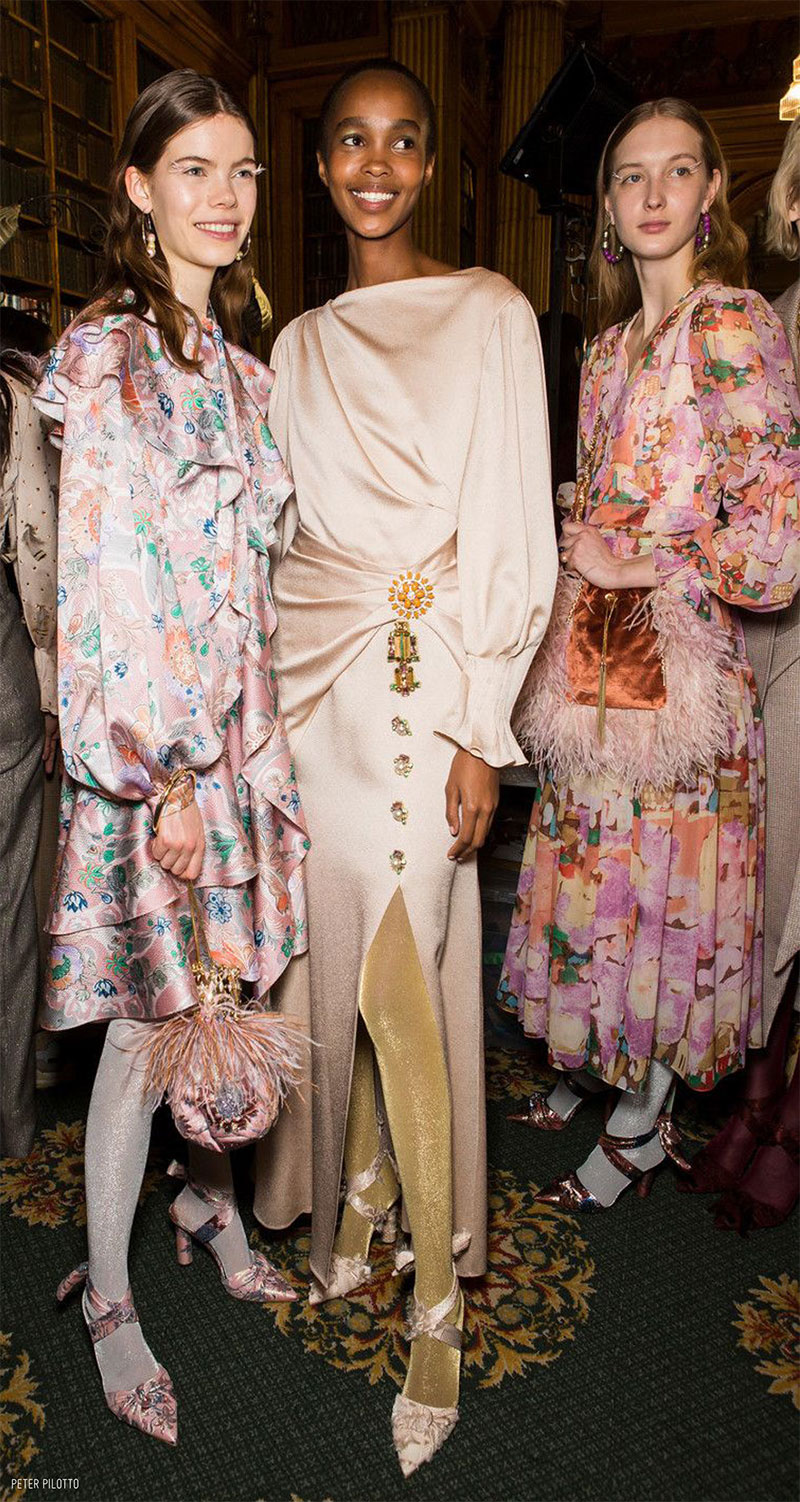